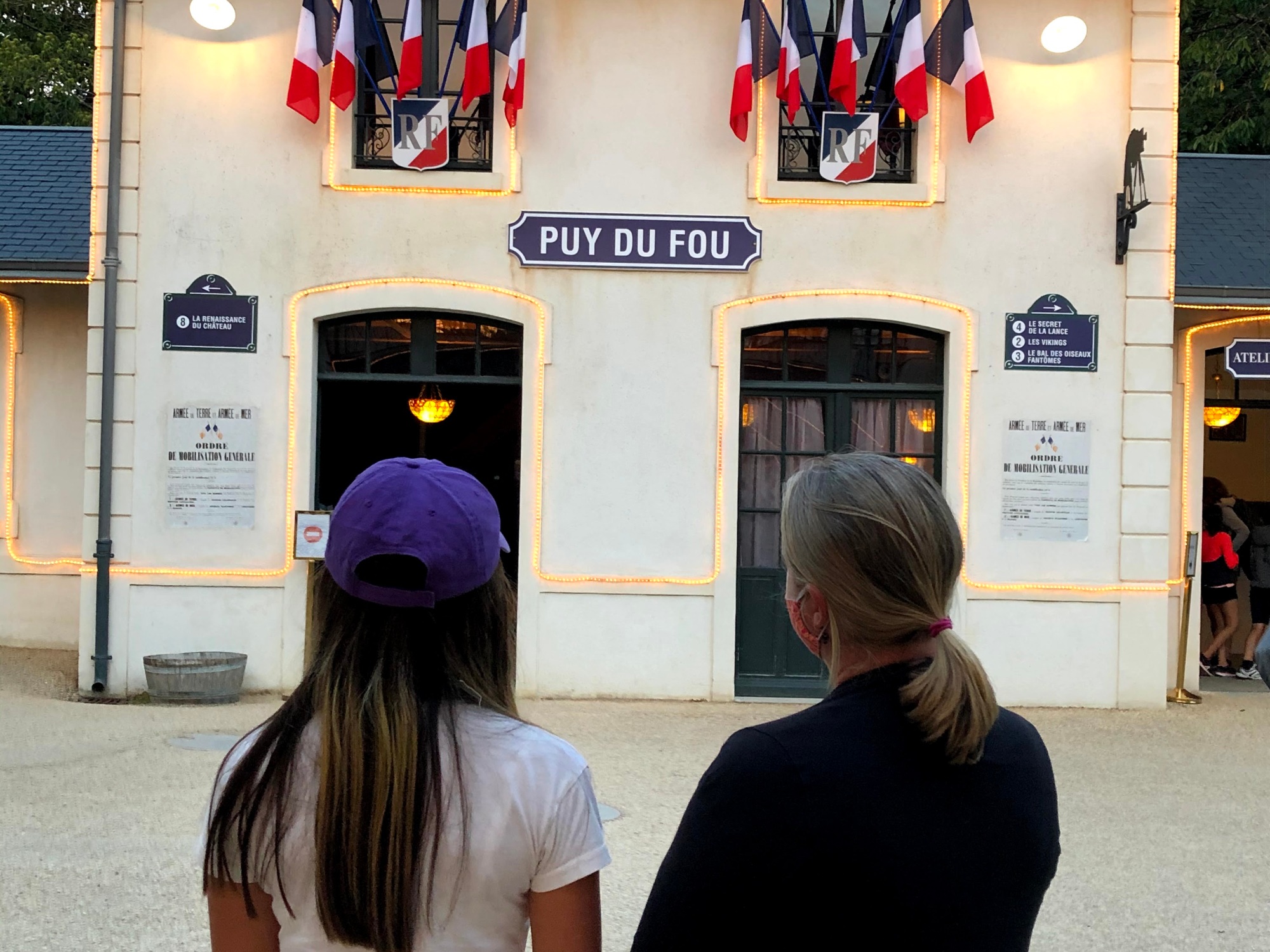 This had to be my favorite day of our whole trip!! We had been staying in a little parsonage in a town so tiny, it didn’t even have a grocery store. One morning our parents called up the stairs: “Hey guys! Get out of bed! We’re doing something special today!” Now, my brother and I had no idea what they had in mind, but seeing how spending 5 days in a nearly deserted town was somewhat losing its charm, we were pretty much game for anything.

After about 2 hours in the car, we arrived at what looked like an amusement park: huge parking lots; people in T-shirts, shorts and sun hats; everyone in sneakers; backpacks filled with water bottles. We parked the car and headed towards the gates of Puy du Fou (when I say gates I just mean security and the ticket entrance). Once inside the park, I was confused because I didn’t see any roller coasters or thrill rides. We took a look at the map the information desk gave us and only then did I grasp the size of the place. With numbered spots all along the arial spanning from 1-19, I had no idea what to expect but felt we were in for a treat…

We followed the crowd to location #4 and sat down just as security closed the entrance. Inside, the audience did have to spread out more than I think they usually do but it was the biggest crowd I had been in since March. Aside from everyone wearing face-masks and alcoholic-gel dispensers everywhere, you would never know we were in the middle of a global pandemic.

In front of us, was an amazing set of a castle wall—on the life-size scale, mind you—out of nowhere, loud music—really, really loud music—starts playing and the crowd settles down in the bleachers right as men on horses come galloping through the castle gate and onto the dirt stretch of the stage in front of us. Did I mention this whole thing is outside?

As the music continues, a lovely, medival-dressed, elegant woman enters on top of the wall. Wait, what!? This is going to be multilayered?? Dialogue starts between the woman and the men, and although it’s all in French—which, through the Puy du Fou app we could listen to a simultaneous English translation—I didn’t think any translation was needed for this classic re-enactment of Joan of Arc.

By the end of the next hour, the castle wall had dropped into the ground and a coloumn appeared behind it. Intruders had broken into the castle! They climbed the column and its walls with ropes before being ‘stabbed’ with spears showered upon them from above. With fire coming out of various secret places in the ground, we could feel the heat and I forgot I was in France at an amusement park. I was sad when the story came to a close, but not before I remembered: we still had a whole day of historical journeys and “rides” ahead of us…

Puy du Fou was amazing! You could easily spend 2 days here because they rotate their shows and, although they offer more shows on the weekends, they only offer some special ones during the week. I wish we had even more time to explore Puy du Fou and I will definetly never forget that special day.

I have been a wordsmith for most of my life but I am not sure I have words to describe the magic that is Puy du Fou. It’s a theme park but there aren’t any rides. It’s a magic show but no magicians. It has hundreds of animals but is not a zoo. It’s theatre but stages are a Gallo-Roman stadium, medieval villages, castle ruins and lakes.

We learned about Puy du Fou because we were lucky enough to stay in a beautiful, old parsonage in rural France without many nearby attractions. The parsonage owner told us a visit to Puy du Fou was a must. So we went. We had no idea what we were getting into.

For 12 enthralling hours—and despite wearing masks and social-distancing from the several thousand other attendees—Puy du Fou almost made us forget about COVID-19. Instead it transported us back in time, bathed us in French history and stunned us with re-enactment shows, the likes of which we had never seen before. And we didn’t even see it all. You can’t. Because one-day is no longer adequate to experience all that the original Puy du Fou in Les Espesses, France has to offer.

Each show is between 20-45 minutes of mind-blowing acrobats, pyrotechnics and fantasy. We witnessed Joan of Arc leave her magical lance with a shepherdess to defend her castle; we watched an armored knight on horseback ascend from the center of a lake occupied by the Knights of the Round Table; we experienced the incredible art of falconry and 600 birds soaring through the ramparts of old castle ruins; and we were guests at a wedding, ransacked by Vikings and then magically restored by a bishop.

Next to Euro Disney, Puy du Fou is the second most visited theme park in France, yet most Americans I’ve spoken to have never heard of it. In fact, many Europeans I’ve spoken to also have never heard of it…but they will, because the theme park is expanding. In 2019, they opened a new Puy du Fou, España, and plans are also underway for another new park in The Netherlands.

If your trip planning brings you anywhere close to Nantes, France, Toledo, Spain or the Netherlands, please be sure you save a day—or two—for Puy du Fou. No regrets!